In April the festival of new minorities will be held in Bratislava. The most exotic festival in Slovakia, which is organised by Milan Simecka foundation, is going to take place from 23rd until 30th April 2015. 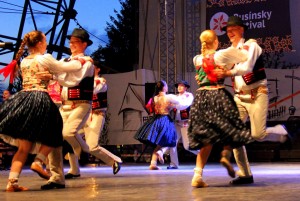 The title [fjuzn] is a phonetic transcription of ‘fusion’, a term which stands for mix of different music styles or for adding Asian spices to European meals. Since 2011 it is also a name of this multicultural festival previously known as ‘The week of new minorities’. Its aim is to connect people of various cultures, raise awareness about new minorities in Slovakia, present lifestyle of foreigners and open public discussion about migration and multiculturalism.

The theme of this year’s festival is ‘Puzzle’ Laco Oravec, director of Milan Simecka foundation, explains the reason as follows: “Slovakia isn’t just a country of Slovaks. It is also a home for a great variety of minorities and, in recent years, a growing number of migrants. In previous years we focused on various foreign nations so during this year’s anniversary of [fjuzn] we want to bring you a mosaic of Slovak society. Puzzle is a metaphor which expresses that each society consists of individual groups which are equally important. Migrants are one of them. That’s why we selected 10 foreigners from different countries and various professions whose life journeys led them here . Their stories will be presented to our visitors in the form of photos and videos.”

Martin Brix, manager of the festival, gave some tips on what parts of the festival visitors shouldn’t miss : “The festival will kick off with a special party in cooperation with International events in Bratislava – parties, trips, gatherings in The Club Bratislava (23.4). On Friday (24.4) the dance company Elledanse presents ‘Dancing Puzzle’, a collection of dances from all over the world. On Saturday (25.4) the popular market ‘Dobry trh’ will offer a great variety of children events and apart from that there will also be ‘Asian zone’ in cooperation with Asia Info Centre. The highlight of the week is the ‘Fjuzn parade’ (26.4) which will host all the cultures under one roof. We will also welcome Puppet theatre at the Crossroads with the show ‘Nostalgia’ (27.4) which tells the story of Slovaks abroad. In addition to that Fero Guldan, a well-known artist, will showcase the series of his paintings ‘Exody’.

During the whole festival the events venue a4 nulty priestor will host an exhibition of posters from previous festivals. And, just like in past years the organisers have prepared several public discussions and other related events.

For more information please visit www.fjuzn.sk or go to facebook profile of the festival.

If you are reading this article you probably plan, or you have already moved, to Slovakia. There is also a good chance that you are…